Today Is Thursday This Means Club Penguin Got Updated! Oh My Godd!

Let’s Get Started With The Updates!

Firstly One Reminder – Future Party Will  Started On 22 May – 3 June! 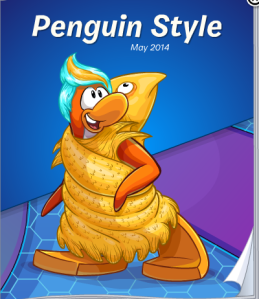 Now The Telescope There Something Like Robot Flying Up There I Think It’s Ultimate Protobot 10000!

It’s Coming Near And Near!

The main article is titled, “Back from the future” and is written by Gary who tells us all about what happened when he visited the future Club Penguin:

How does Gary keep the dates straight
By Gary The Gadget Guy – Greetings 2014! I’ve just come back from the wondrous future. You won’t believe what I saw. Space elevators, an alien zoo, and robot waiters. It was a scientific trip! [Continued…]

The Support article is titled, “Hats of to hat week” and is about the Funny Hat Week which has now ended:

By Rookie – Whoa! Did you guys see the Funny Hat Week at the Dock?! Those hats were HILARIOUS! I still can’t get over the Mullet hat. BAHAHA! Just look at it… look at it!
Whew…okay. Aunt Arctic told me I should report this event, so I’m gonna report now.
The hat week wasn’t just about bringing the funny. There were also categories for the fishiest hat, tastiest hat, and biggest hat!
It was crazy! I would have joined but my hat is glued on so I don’t lose it. Next time, I’m going to ask for a spiniest hat competition. I think I could do super well at that one!
What do you guys think? hat kinds on hats do you wanna see more of?

And lastly, there’s this weeks upcoming and ongoing events list: 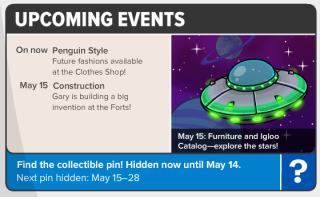 On now – Penguin style: Future fashions available at the clothes shop!
May 15 – Construction: Gary is building a big invention at the snow forts!
May 15 – Furniture and Igloo Catalog: Explore the stars

Also in this weeks issue there’s a secret Elite Penguin Force message that has been hidden in this issue, to find it click “The EPF” in the ask Aunt Arctic section of this newspaper:

You have a keen eye! Head to the Everyday Phoning Facility in the skit village to learn more about the organisation.

What do you think about this weeks issue of the Club Penguin Times?

There No EPF Message Today!

The Last One The Home Page!!!

UPDATE – Go To Clubpenguin.com To The New Page!

UPDATE – Go To http://www.clubpenguin.com/?ga=hpmvt_goto_home To The Home Page!